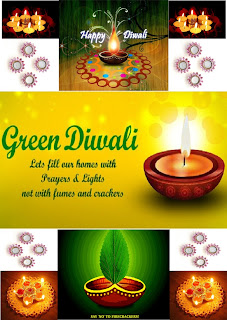 Diwali, a celebration of Lord Rama coming home after 14 years of exile. It’s one of the most widely and most enthusiastically celebrated festivals in India. Often known as the festival of lights, Diwali is celebrated by burning Diyas and exchanging blessings. Celebrated on the night of Amavas,  festival marks the return of Lord Rama with his brother and wife Lakshman and Sita respectively back to their home in Ayodhya. Diyas are lighted up to symbolize that darkness is overpowered by light. But with time this has instead turned into a show of fireworks. Huge amount of fireworks is used in India during the time of Diwali. According to a study, breathing a day during the time of Diwali is equal to smoking 200 cigarettes.

Dehradun during the time is decorated like a bride. You see lighting everywhere, diyas burning in even the smallest houses. But after the night of Diwali in the morning one is not able to see the mussoorie mountains due to the high amount of pollution in the air. The chill in the air during the time of this festival temporarily turns into a warm with lingering smell of gun powder. Firework leftovers everywhere. With small tid-bits of red paper left after Ladis, sticks on which rockets are mounted, Anaar  and charkhi shells and not to forget the phuljadiyans. These may not be such big things for us to consider after such a big night of festivities.  But, these things pollute our city.
Now, not saying that Diwali should not be celebrated or there should be a restriction on anything. What each of us can do is employ the idea of a Green Diwali. Green Diwali is a very simple practice and also cost efficient. Rather than literally burning thousands of Rupees as crackers we can make someone’s festival happy by giving just about a half. Instead of crackers if sweets and clothes are distributed by each one of us to the poor, we can make a difference in someone’s life. Now for some this may be a boring idea of celebrating but its way more practical.
We used Diyas which would give employment to thousands of poor Indian people rather than cheap Chinese lights. By using these simple techniques we can help reduce Air Pollution, Noise Pollution, Child Labor and also accidents which happen during the making and burning of crackers.
Let’s take a pledge to follow this initiative of Green Diwali because it’s high time we start thinking about our surroundings and what better place to start than our very own Dehradun. Top 6 Places To Visit In Ranikhet Dehradun to Nainital: How to reach Nainital from Dehradun by road

Do you know that this Indian Palace Museum featured in a...